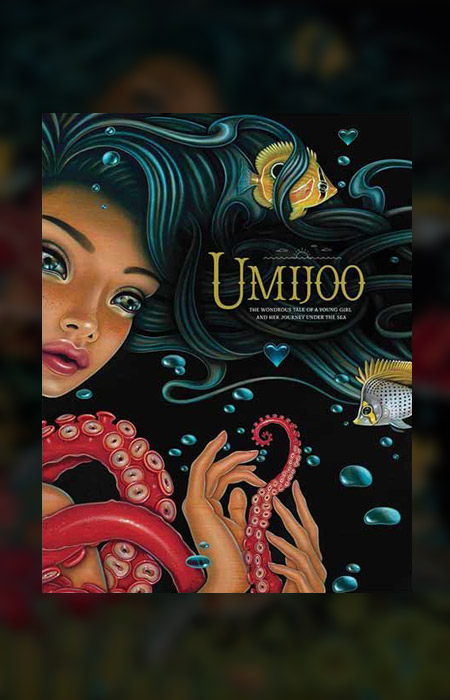 The Umijoo Project has produced its first environmental art book about the connections between our daily life decisions and the health of our planet. Following the guiding question “what is love?”, Umijoo uses evolving verse, gallery-quality artwork, and a classic hero’s journey plot device to weave a story about food, relationships, and the ocean. Umijoo is designed to inspire ocean conservation in readers of all ages, but is specifically tailored to children ages eight through twelve.

“The magnificent crystalline wonderland of the Mystic Journey Crystal Gallery is festooned with gorgeous artwork — some made by human hands, and some by the Earth itself — and I am incredibly excited to be sharing Umijoo aloud in this magical space.”

The reading will be followed by an evening of drinks, music, and conversation.

Casson Trenor has dedicated his career to improving the relationship between human beings and our oceans. He is a seasoned public speaker who uses powerful storytelling and compelling oration to communicate science-based environmental realities. During the span of his conservation career, Trenor has pursued illegal whalers through the icy waters of Antarctica, conducted record-setting beach cleanups to raise awareness of plastic waste, and spearheaded successful international campaigns to reform some of the world’s largest seafood companies. His current focus is the ocean plastics crisis.

Trenor is the author of two books on ocean conservation, including 2019’s Umijoo — a children’s book about food, our oceans, and the importance of making responsible choices. He is a frequent commentator on ocean issues and has been featured in many international media outlets, including CNN, TIME, Forbes, Asahi Shimbun, and the New York Times. Trenor speaks extensively through a diverse array of panels, lectures, and presentations around the world, including keynoting the 2019 TD Summit Awards in Grand Cayman and delivering a TED talk at TEDxSF on a new paradigm for contemporary activism.

Trenor is a founder of the world’s first sustainable sushi restaurant, San Francisco’s Tataki Sushi and Sake Bar. Building on the success of the sustainable sushi movement, Trenor and his partners went on to open several more restaurants including San Francisco’s Shizen and Honolulu’s Tane, fully plant-based establishments that have received a great deal of critical acclaim.

In honor of his conservation leadership, Trenor has received a Congressional Commendation, TIME

Magazine’s “Hero of the Environment” award, and the “Ocean Protection Hero” award from the well-respected environmental organization Save Our Shores. Trenor’s work is highlighted in the documentaries Sushi: The Global Catch, The Last Ocean, and Of The Sea, and his efforts to protect whales in Antarctica are documented in Peter Heller’s book The Whale Warriors.

Born in Washington State, Trenor speaks several languages and holds an MA in International Environmental Policy from the prestigious Middlebury Institute of International Studies at Monterey, which in May 2012 honored Trenor by presenting him with its Alumni Achievement Award. Prior to his graduate studies, Trenor received a BA in Political Science from Hobart College, where he was inducted into Phi Beta Kappa.