The Dreams of a Master 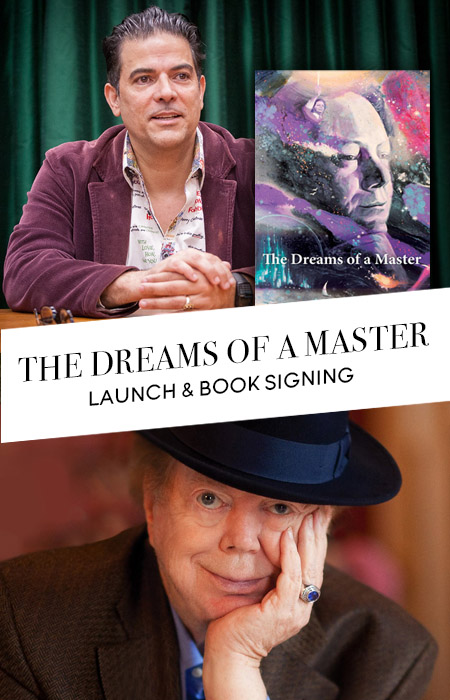 Author Jesus Garcia, D.S.S., debuts his second book, which recounts the unfoldment of his life after the physical passing of his beloved spiritual teacher and father figure, Dr. John-Roger, D.S.S. (known as “J-R”). In addition to signing copies, he will speak, respond to audience questions, and invite all attendees to participate in the sacred Satsang energy.

Garcia spent 26 years assisting, protecting, and learning from John-Roger, the Sound Current Master and Mystical Traveler who founded the Los Angeles-based Church of the Movement of SpiritualInner Awareness (MSIA). His first book about their friendship, The Love of a Master, reached #1 Amazon Best-Selling status for the New Age Mysticism category shortly after launching at Mystic Journey on September 24, 2017.

The Dreams of a Master picks up three years following J-R’s passage into Spirit, as Garcia prepares to leave the Mandeville Canyon house where he lived for 29 years. During a lengthy global promotional tour for The Love of a Master, he finds solace in both his inner travels—through memories, dreams, spiritual exercises, and a strong inner connection to J-R—and his outward journey, as he spontaneously shares stories in Satsang with MSIA communities around the world, and finds himself embraced by fellow ministers and initiates of John-Roger.

Beyond the story narrative and travel journal-like entries, The Dreams of a Master also describes dreamwork techniques, tithing, seeding, money magnets, meditations, and other spiritual practices taught by J-R that Garcia has found valuable in his own life.

A former film actor, Garcia appeared in such popular films as A Nightmare on Elm Street, Along Came Polly, We Were Soldiers, Spiritual Warriors, Collateral Damage, and Atlas Shrugged, and co-produced three full-length features with John-Roger: Spiritual Warriors, The Wayshower, and Mystical Traveler. He resides in Santa Monica with his fiancée, Nicole.

Jesus Garcia spent 26 years working for and learning from his spiritual teacher and Mystical Traveler, John-Roger, D.S.S., (known as “J-R”), founder of the Los Angeles-based Church of the Movement of Spiritual Inner Awareness (MSIA). Garcia was initiated into the Sound Current of God by John-Roger and ordained as a minister into the order of Melchizedek Priesthood by John Morton, who currently holds the keys to the Mystical Traveler Consciousness.

In creative collaboration, John-Roger and Garcia, a respected Hollywood cinema veteran, co-produced three feature movies: Spiritual Warriors, The Wayshower, and Mystical Traveler; and four short films, as “Scott J-R Productions.” Since John-Roger’s transition in 2014, Garcia has continued his ministry of sharing the spiritual teachings of J-R through movie screenings, Practical Spirituality workshops, and spiritual counseling to students and initiates of the Traveler all around the globe.

Previously, as a recognized actor, Garcia appeared on-screen in such popular films as A Nightmare on Elm Street, Along Came Polly, We Were Soldiers, Spiritual Warriors, Collateral Damage, and Atlas Shrugged. He currently resides in Santa Monica, California.