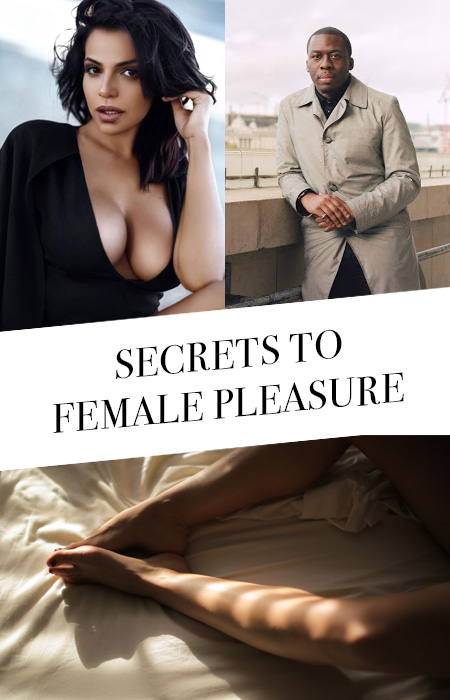 Ever heard of kunyaza - the secret to female pleasure? Want to know how women can orgasm during sex? How can men last longer in bed? Do you want to be sexually satisfied? How to overcome body shame? What is sexual well-being? Hosted by sex educator Habeeb Akande and glamour model Vida Guerra, discover kunyaza – a centuries-old practice.

In the workshop you will learn about sexual well-being and this traditional African sexual practice. Originally from Rwanda, kunyaza has been practiced for hundreds of years in East African countries like Uganda and Kenya.

In traditional African cultures, women’s pleasure comes first and men are expected to satisfy their partners. For some sex educators, kunyaza is a solution to close the orgasm gap and the rest of the world should pay attention. We can learn much about this centuries-old practice.

According to Rwandan legend, kunyaza originated with an ancient queen whose experience formed Lake Kivu. The motion became known as the kunyaza technique.

WHAT TO EXPECT AT OUR WORKSHOP

At the workshop, you will learn about the secrets to female pleasure from British-Nigerian sex educator Habeeb Akande and Cuban-American model and Reiki healer Vida Guerra.

Did you know that there is a notable gap between heterosexual men and women in frequency of orgasm during sex? It's a phenomenon known as the “orgasm gap.” According to a national study, 95% of heterosexual men usually-always orgasm when sexually intimate, compared to 86% of lesbian women, 66% of bisexual women and 65% of heterosexual women. Why are women less likely to orgasm when a man is involved? Are most women not sexually satisfied? We will explore pleasure disparity between heterosexuals and how to bridge the orgasm gap with the kunyaza tradition and relaxation practices.

Some questions we will explore during the workshop include:

• what does it mean to be sexually liberated?

• how to overcome body shame?

• how women can orgasm during sex?

• what is sexual satisfaction?

• what is sexual well-being?

• what is sexual energy?

• how can men last longer in bed?

In addition, you will learn about the female anatomy & arousal, why foreplay matters and the mysteries of female pleasure and sexual satisfaction.

The workshop does not involve nudity or sexually explicit demonstrations. Men and women are both welcome to attend. The book Kunyaza: The Secret to Pleasure will be available to purchase at the workshop from author Habeeb Akande.

Habeeb Akande is a sexual well-being educator and author of Kunyaza: The Secret to Female Pleasure. Habeeb leads kunyaza workshops, seminars and panel discussions on female sexuality, intimacy and African erotology (the art of lovemaking). Based in the UK, Habeeb has given workshops on female pleasure, masculinity and the orgasm gap in France, Brazil, the UK and the United States. Habeeb is on a mission to close the orgasm gap and teach people how to be sexually satisfied.

Vida Guerra is an acclaimed model, actress and certified Reiki healer. Brought up in a conservative Cuban family, Vida went on achieve global fame as a model following the December 2002 issue of FHM. It led to multiple music videos, movies and magazine covers including Playboy, FHM, and Black Men Magazine. At the height of her career in 2007, Vida left Hollywood to pursue a spiritual journey of self-discovery and well-being. Now at the age of 45 Vida hosts the Heaven with Vida radio show and still has a strong social media presence with millions of followers as a wellness influencer.