LIVING IN AN ALIEN BODY 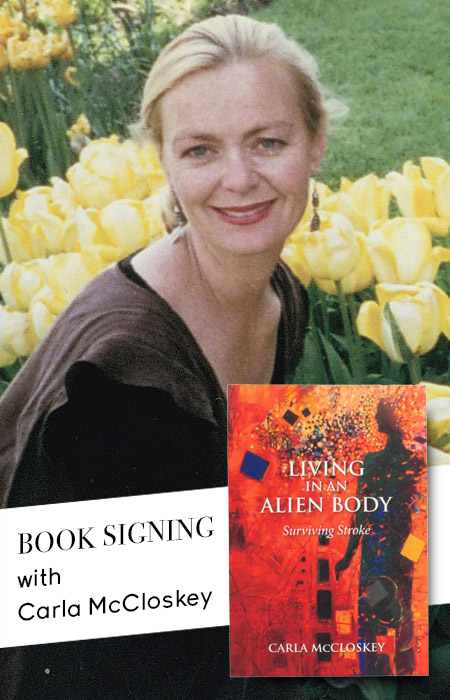 Plan to Purchase Your Copy In-Store

Join us for readings and discussion of the inspiring journey of recovery from stroke. This will be interesting for anyone, but a must for someone who has had a stroke. Approximately 700,000 Americans will suffer a new or recurrent stroke this year according to the American Stroke Association.  On average this means that someone has a stroke every 45 seconds.

In July 2003 Carla McCloskey suffered a major stroke. Carla has turned the story of the stroke, her heroic recovery and her research into stroke into a great new book, LIVING IN AN ALIEN BODY - Surviving Stroke.

LIVING IN AN ALIEN BODY will transform the way you think about stroke. It may even help you or a loved one survive it—not as a helpless victim, but as an unexpected journeyer into strange and foreign lands.

Carla McCloskey is an assistant director and director in film and television. She was one of the first women selected to become an assistant director by the Producers Association. She met her husband, actor and artist Leigh J. McCloskey, her first day in “the business” on the television series, Executive Suite, in which Leigh was starring. Carla went on to be the assistant director on many films including The Goodbye Girl, California Suite, Death Becomes Her, Point of No Return, Point Break, The ‘Burbs, The Color of Night, Hook and Jurassic Park. She worked with directors such as Steven Spielberg, Joe Dante, Robert Zemeckis, Richard Rush, John Badham, Herbert Ross, and Cher. She also worked on the television series Amazing Stories, Babylon 5, Ally McBeal, Gilmore Girls and The Closer. She began directing on Gilmore Girls.

Carla wrote her acclaimed first book, Grandma Told Me So, to help others find and keep the best possible relationships in their lives. She has written, Living in an Alien Body, to help others navigate the life-altering experience of stroke.

Carla and Leigh live in Malibu, California. They have two daughters, Caytlyn and Brighton, a granddaughter, Leighton, and a wonderful menagerie of cats and dogs and various other animals.

Carla and Leigh host wonderful events at their home, Olandar, every week where Leigh has created the multi-dimensional, magical library/wonder-study, The Hieroglyph of the Human Soul.