BAREFOOT IN YOUR HOME EDITION
HOSTED BY 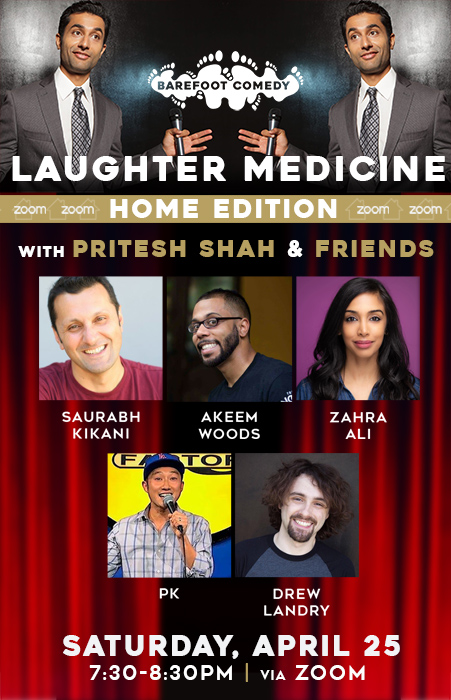 With a new lineup each month of hilarious working comedians, the show has featured the likes of Luke Null (SNL), Julia Hladkowicz (Just for Laughs), Asif Ali (Bojack Horseman, Wrecked), and Grant Cotter (MTV). But most importantly, it’s hosted and booked by Pritesh Shah. He has decent humor, great skin complexion, and the best credit score.

As we all know, laughter is great medicine and a wonderful healer. Come have a drink, share some laughs and hug YOURSELF. You'll leave with sore cheeks, an open heart and some new friends - via ZOOM!

Beverages are available IN YOUR HOME!!!

Please purchase your ticket at least 1 hour before the event - we will be emailing the ZOOM link to you 15 minutes before the show starts. Please don't share this, we are dispersing the ticket sales between Mystic and the comics. Make sure you have the Zoom app downloaded on your phone or computer: https://zoom.us/download

Saurabh Kikani is a stand up comic, storyteller, solo artist, and filmmaker. Born to Indian parents, raised in San Bernardino, CA, and obsessed with nachos, Saurabh has performed stand up comedy and solo shows all over the world, produced feature films, and given his entire family more gray hairs than they deserve. His work touches upon the absurd, the political, and his own idiosyncratic idiocies.

Zahra Ali is a comedian, writer, actress, and all-around cool person. She performs stand-up comedy all over the country, often bicoastal from New York to LA. She uses her arsenal of jokes to tackle feminism, racism, terrorism, and a few other isms. You can watch her in award winning shorts like Michael Peterson and American Curry Pie. She also hosts a popular podcast called 2 Girls, 1 Guy.

Drew Landry is a stand-up comic based in Los Angeles. He has toured with Iliza Shlesinger and with Carlos Mencia, and he writes satirical articles for the popular hip-hop site DJBooth.

PK is a regular at The Icehouse, World Famous Laugh Factory, Improv, Comedy Store, and Haha Comedy Club. He has brought over 10,000 people to the clubs, many of them seeing stand up comedy live for the first time. He has performed at over 100 universities across the United States.

He was the Grand Prize Winner of The Uncle Clyde's Comedy Cup at The Pasadena Icehouse sponsored by H2F Productions, which featured 100 comedians and he took first place. Growing up PK stands for Paul Kim and Preacher's Kid. (Preacher's Kids = Problem Kids).

Akeem Woods is the funny little brother you always “never” wanted. His comedy style will have you on the edge of your seat reeling from laughter. No topic is safe from discussion, whether it be the KKK or the hardships of growing up poor. Catch him in comedy clubs all over the country.

About the host, Pritesh Shah // @thepriteshshah

Pritesh Shah has quickly become a prolific actor, producer and comedian. After graduating as an accountant and quitting his dream job, Pritesh cut his teeth as a standup comic in Southern California, where he was mentored by Chad Coleman (The Wire, Always Sunny) and performed at clubs throughout SoCal. Pritesh has appeared on dozens of hit television shows, including GRIMM, CRIMINAL MINDS: BEYOND BORDERS, GAME OF SILENCE, and recurring on the Emmy nominated SIX on the History Channel. On the big screen, he had scene-stealing roles in TIE THE KNOT with Tara Reid, WIZARDREAM with Ernie Hudson, and ALL IN TIME with Vanessa Ray. 2017 has been no different, producing the indie comedy FISHBOWL CALIFORNIA and starring in THE BLACK GHIANDOLA with JK Simmons, Johnny Depp and directed by Sam Raimi. He is also starting a podcast called “Dark and Darker” with NFL star turned astrologer Ricky Williams. He recently got a an agreement with Lost Lane Entertainment for a pilot comedy called BROWN MAN PROBLEMS he wrote with writer Dennis Fallon.